Our service is based on series of objects like users, devices, groups, call flows etc. Before you dive in buiding your first configuration, you might want to read the following as it explains the logics to follow.

We consider a device anything that someone might be given to make phone calls, send faxes, etc. A device is a physical device (can be a softphone on a PC though). Unlike other systems, devices are not inherently tied to a user. You must do this yourself.

We consider a user the concept of a person. Users ultimately have, or “own”, devices and voicemail boxes. A user can have multiple voicemail boxes and devices. Sending a phone call to a user rings all of the user’s devices.

Consider this diagram which displays the most common use case: 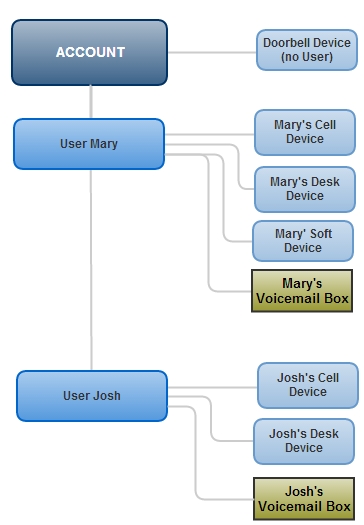 In the above scenario, the doorbell device is standalone. It has no user, which means no voicemail and no other features tied to it. This is fine – it can still make and receive calls, but no relationships exist.

In the above scenario, Mary and Josh have multiple phones. If you ring the user’s phone number all their devices will ring.

Callflows are really just simple instructions for what to do when someone calls a phone number (external or internal number).

Callflows are quite literal, though, and this can confuse people. If you setup a call-flow to ring a user, it does that AND ONLY that. It will not also send the call to a user’s voicemail – you need to instruct the system to ring the user and then go to their voicemail. This gives you more control but can be more cumbersome to manage. 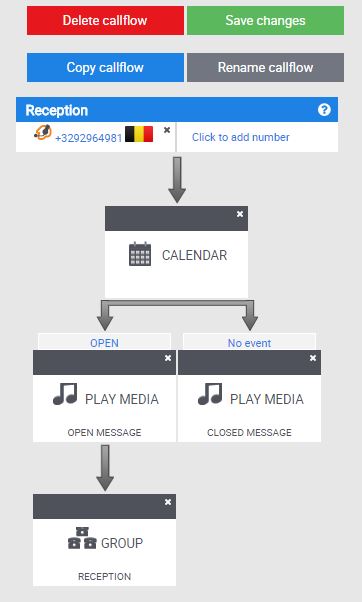 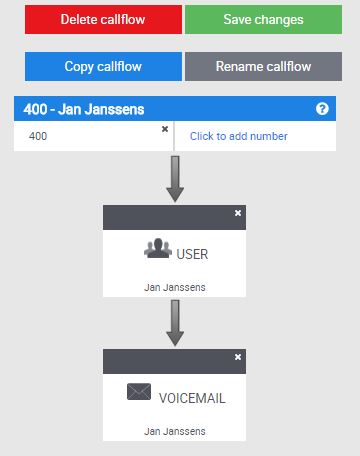 Below is a screencast that shows how to build a basic call flow for a user. In this scenario the user is given 2 numbers: a public number and an internal extension. Note that a call flow could have several public numbers and several extensions.